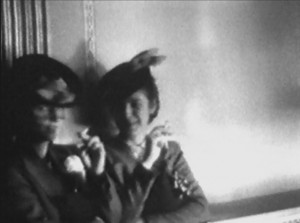 "Record of a film society screening at the Stanley Theatre on Granville Street, Vancouver. Includes shots of the "concert" program; scenes outside the theatre before and after the show and at intermission; audience in the lobby; movie scenes shot off the screen from the auditorium; unidentified man introducing films. Oscar Burritt and other film society members are glimpsed briefly. " (BC Archives)

"Sam Fass, having captured some remarkable footage of the Ice Follies in 16mm Kodachrome, set about to weave these shots into an interesting continuity with a logical story line. The director of the ice show summons to his office two likely prospects for one of his ice numbers. When the young women arrive, he projects 16mm movies of his show in order to demonstrate the numbers in which he wishes the girls to take part. When the film ends, the girls agree to join the show and sign contracts -a simple story thread on which the shots of the Ice Follies were deftly strung. The camera work on the Follies numbers is just about tops. Exposure is all anyone could ask for and each number is carefully chronicled and later edited in a slick manner that gives the illusion it all was carefully planned production." American Cinematographer, May. 1952, 222