Wake of the Bluenose

"Those who have been in the San Francisco-Oakland district will surely remember the impression made by the harbor and shipping: well, Mr. Fox utilized this as a basic part of his story. Moreover, he utilized a little-known aspect of it — the port of "Ghost Ships" — a section of the harbor in which scores of old, condemned sailing-ships and some old shipping-board steamers, too, are tied up, decommissioned, and slowly rotting, cared for by a few old sailors turned watchmen. Mr. Fox used this background, and, for actors, he chose one of these old sailor-watchmen and his dog. His film was a simple little picture, but more than ordinarily interesting because of the way he wove his background into the story, and the fact that everything combined to make the film natural — believable." American Cinematographer, March 1934, 468. 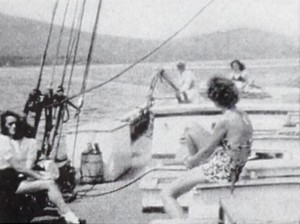