"The Toilers, a 150 ft. Kodacolor reel made by Arthur G. Greaves, demonstrates the continuity possibilities of Kodacolor, a much neglected aspect of amateur color movies. Men at work — in the harbors, along the seacoast and inland, caring for flocks and harvesting grain — is the motif of the picture, relieved by a few glimpses of men and children at play. The picture is distinguished by beautiful photography of consistent quality and by a smooth succession of moving compositions in color. These qualities, combined with a clear continuity, give the film much more unity than is usual with Kodacolor reels. This is one of the all too few Kodacolor films that may be viewed as a subject possessing an artistic purpose as a whole, rather than as a series of separate scenes and sequences. Its chief color triumph is, perhaps, in the scenes of the harvesting against the background of fields of golden grain." Movie Makers, Dec. 1931, 658. 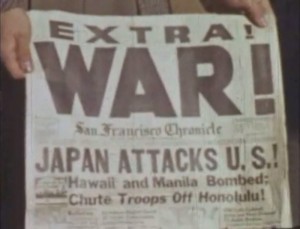 "Amateur film footage shot by Dave M. Tatsuno while he was interned at the Topaz War Relocation Center, the Japanese-American internment camp located in Delta, Utah. The footage dates from 1942-1945, the years that Tatsuno was interned in the camp." Archives West.