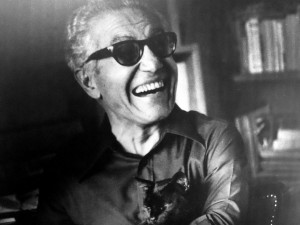 “Ruhi Su (1912-1985) was a Turkish folk singer and saz virtuoso. Su was born in Van, an Eastern district of Turkey, but grew up in Adana, in the Southern region of Turkey. He was an Alevi. He started playing the violin at the age of ten. In 1936 he graduated from the Teacher's School of Music, and in 1942 from the Opera Department of State Conservatory in Ankara. Over the following ten years, he performed at the State Opera in Ankara as a bass-baritone, appearing in operas such as Madame Butterfly, Fidelio, Tosca, and Rigoletto. He also studied Turkish folk music, and while working at the opera he also made regular radio programs playing saz and singing folk songs. A politically motivated arrest in 1952 and imprisonment for five years ended his career in the opera. After serving his "sentence for thought", he dedicated himself to folk music. While he roamed all over Anatolia from one village to another he started compiling numerous folk songs and arranged and performed them using western techniques. His western music career formed the basis of his approach to interpreting and performing traditional Turkish music. He argued that the authentic music should not be imitated as it is found locally but rather elaborated into national music with the enriching support of international music, perceiving it as a contemporary of Atahualpa Yupanqui and Pete Seeger. Ruhi Su combined his efforts of creating a national awareness of the rich Anatolian culture with his compositions based on texts of Sufi poets Yunus Emre and Pir Sultan Abdal, as well as his own Alevi poems. He also established and trained a choir in the 1970s and conducted them in many concerts and recordings. His approach in bringing forth the ignored suffering of the oppressed and his love of humankind in his musical work has gained great respect and support from his audience and had a deep effect on many musicians who paved the path to a more open-minded society.” Last.fm: https://www.last.fm/music/Ruhi+Su/+wiki (23 Oct 2019).