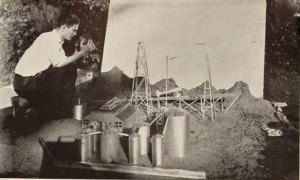 Lyford worked for Walt Disney as an animator in the 1940s. He also won the Academy Award for Best Documentary feature for The Titan: Story of Michelangelo in 1950.
Listed as being from Glendale, California, as well as Seattle, Washington.

Lyford shares autobiographical details in "It Gets in Your Blood" (American Cinematographer, Nov. 1938, 471-473).