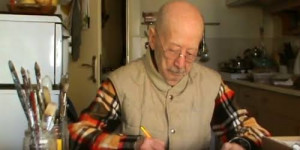 “Kaya Tanyeri was born in Zonguldak in 1930. He graduated from the Faculty of Pharmacy at Istanbul University. He then ran his own pharmacy business until 1990. Besides his business, Tanyeri kept being very interested in visual arts. He met Bedri Rahmi Eyüboğlu in the 1960s. The relationship with Eyüboğlu enabled him to gain new perspectives in painting art. In the 1970s, Tanyeri also worked in other branches of art such as photography and short film. He ran his own photography studio from 1965 to 1970. Not only painting exhibitions, but Tanyeri has also had photography exhibitions and was awarded in Hisar Short Film Competition for three times. He is a member of the UPSD Association. Currently, Tanyeri continues his work in Istanbul.” Turkishculture.org: http://www.turkishculture.org/whoiswho/visual-arts/painter/kaya-tanyeri-1814.htm (1 November 2019).