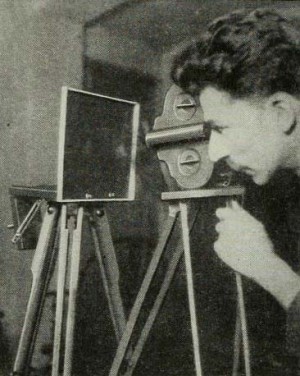 "Jules V. D. Bucher is the jack-of-all-trades of American documentary and one of its busiest men. By 1940, he had been a producer for the Harmon Foundation, photographer for the child psychology series at Yale University and for the American sequence of Rotha's New Worlds For Old, editor of Men and Dust and besides countless other activities had photographed the world tours of Julien Bryan. He worked closely with Bryan on the latter's Inter-American series, in particular making a fine directorial job of the document of the Aymara Indians, High Plain (1943). In 1945, for the O.W.I. Overseas news-reel, he directed and photographed the brilliant five-minute film The Window Cleaner. One of the few examples of humour in American documentary, it was a dry study of a day in the life of a mild, elderly workman calmly attending to his job as he hangs like a fly from the facade of the Empire State Building. In marked contrast with the sententious official tone of too many Government documentaries, The Window Cleaner joyously seized upon a detail of the American scene which told its own story without editorialising" (Rotha, 326).