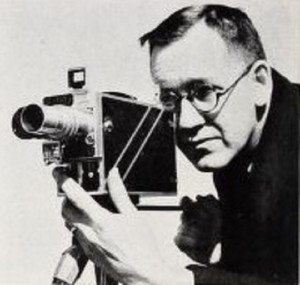 Institute of Amateur Cinematographers of London

"Mr. Ells, born in Berlin, N.H., was educated at the University of Pennsylvania, in the Wharton School of Finance. As an accountant, he was a member of the '"Foreign Legion" of the Standard Oil Company of New York and of other Standard organizations. His work took him to Colombia, Greece, Korea and Japan. His first photographic experience came from his aunt's box camera, which he borrowed and turned to good account. Following this introduction, he went ahead with photography and sold "stills" to newspapers. In Korea, he began to make movies, and his first picture was what he calls "an assembly job," which gave him a sound grounding in the necessity for continuity. Then came Rice, which is still used by missionaries. It won the gold medal of the American Society of Cinematographers in London, in 1934 and was honored in the London Daily Mail contest. It also gained laurels from the American Society of Cinematographers. In The Beginning, Consider the Lilies and Still Waters were honored by Movie Makers and by numerous other bodies. Mr. and Mrs. Ells left Japan in 1940, on his retirement from active Standard Oil service." Movie Makers, July 1941, 348.