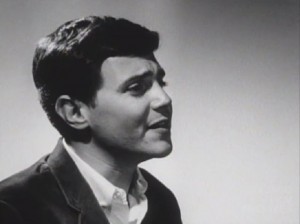 Don Klugman, as seen in his film I've Got This Problem.

Don Klugman graduated with a Masters in Cinema at the University of Southern California in 1956. He returned to Chicago and began working as a production assistant at WGN-TV, a writer-producer at EWR&R Advertising and a scriptwriter at Dallas Jones Productions. In 1960 Don joined Encyclopedia Britannica Films to script their landmark biology/ecology series; and, three years later, when it was nearly complete, he travelled to New York City, to write for McGraw-Hill and ACI Films. Unhappy with the New York lifestyle and production environment, Don returned to Chicago, where he free-lanced for Fred Niles Studios. During this time he made three short films, NIGHTSONG, I'VE GOT THIS PROBLEM and YOU'RE PUTTING ME ON, that were widely distributed and critically acclaimed. All have been restored with funding from National Film Preservation Foundation grants, and are available from the Chicago Film Archives. In addition, his student films, RIDE THE GOLDEN LADDER and RIDE THE CYCLONE, were preserved with funding from the NFPF. Don also worked as an actor -- in his own films, at Stagelight Theatre in Wheeling, Illinois, and in the CBS historical drama, If I Should Die. Returning to educational scriptwriting, Don was hired by Coronet, where, in seven years, he wrote nearly a hundred educational film scripts. Thereafter, on an independent basis, Klugman continued to write and produce films for Coronet, Encyclopedia Britannica, Nystrom and FilmFair. Early in the 1970s Klugman wrote and directed a long-form film that brought back the principal characters of I'VE GOT THIS PROBLEM and YOU'RE PUTTING ME ON. Featuring Chicagoans Judy Harris,, Del Close, Win Stracke, Carl Stohn and Faith Quabius, A MULTIPLE CHOICE TEST was screened as a work print but was not completed. He's now planning to release a digital version. During the 1980s Don rented space in Britannica's Los Angeles studio, where he produced for both EB and Coronet. His favorite film from this time is CONSUMER ECONOMICS AND YOU, shot at Woodfield Mall, which uses music, dance and fantasy to explain basic economic principles. He also produced the MISSION THIRD PLANET series in which a spaceman and a robot introduce children to life on earth. As educational AV declined, Don's work transitioned to business education and corporate multimedia. At The Creative Establishment, Chicago, and at Motivation Media, Glenview, he wrote and directed dozens of corporate seminars, exhibitions, sales training and business shows and several significant public service films and videos -- including THE BALANCE SHEET for Illinois Governor's Committee for Employment of the Handicapped. Currently Klugman teaches filmmaking and communication at Columbia College Chicago. - From Chicago Film Archives