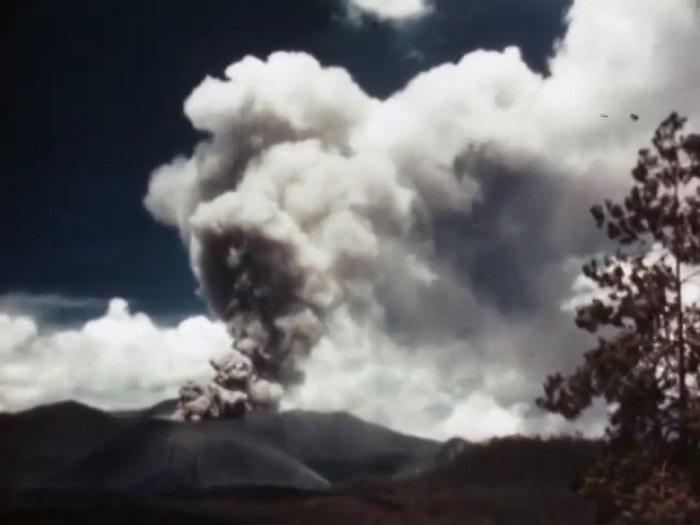 Still from Paricutin, via The Field Museum of Natural History Library.

"Paracutin, by Ralph E. Gray, is probably the most complete and accurate record of Mexico's new world wonder yet to be produced on 16mm. film, even possibly in the 35mm. medium. Mr. Gray, long one of Mexico's most devoted American friends, was on the scene soon after the eruption broke out in a peasant's cornfield, and he has made four further trips to record changes and progress in the volcano's life. His superbly filmed footage presents the dramatic subject from every available viewpoint — even to seemingly dangerous closeups of the fiery rim — but it has been edited and is presented in strictly accurate chronological order. Human interest scenes of the effect of the giant cauldron on native life are plentiful and appealing, even to a striking sequence of the heavy dust deposits along the streets of Uruapan, more than thirty miles from the eruption. Paracutin is today a dramatic study of beauty and power; it should prove in the future to be a unique and valuable scientific record." Movie Makers, Dec. 1943, 474.

Some Movie Makers references to this film list its title as Paracutin, though the proper spelling is Parícutin. The film was available in the ACL's Club Film Library.

Footage from this film is included in the video link offered via The Field Museum of Natural History Library. This is a re-edited version of the 1943 film, which includes additional footage of the volcano shot in the years following.

"Paricutin, 400 feet 16mm. Kodachrome silent, is the only complete 16mm. motion picture record of the growth of Mexico's modern volcano. Filmed by Ralph E. Gray, P.S A., subject comprises the best footage of six filming expeditions to site of the volcano since its birth in a peasant's cornfield. Included is every possible kind of camera shot affording a comprehensive study of volcanic eruption and the manner in which a volcano grows, plus scenes of the havoc wrought on vegetation and habitation in the immediate vicinity. Picture is a must for educational libraries and geographic study groups." Home Movies, Feb. 1946, 88.