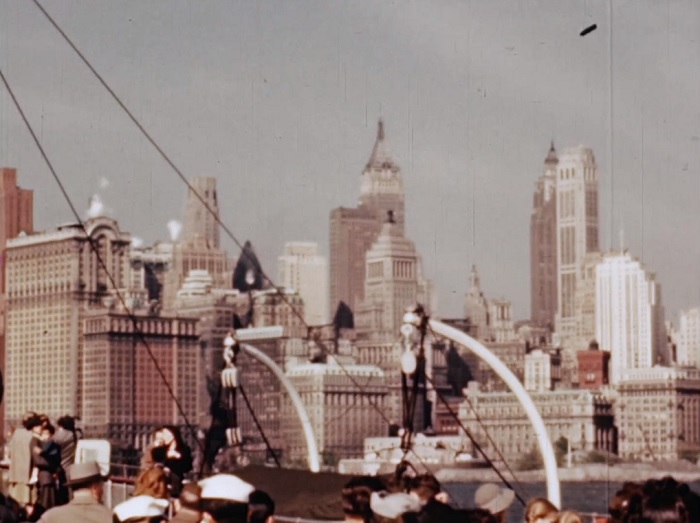 "Most of the residents of New York City know that the world's metropolis is something more than a play place for sensation hunters. But, if one were to judge from many films of New York City, the conclusion would be inevitable that the urban settlement at the mouth of the Hudson River is chiefly devoted to night clubs and parades and is populated largely by those who frequent them. In New York Calling, made for the New York Central System, of which he is supervisor of the Motion Picture Bureau, Frederick G. Beach has presented the New York Central's eastern terminal city as a reasonable and understandable place, where sane people live and to which a man may bring or send his family for a holiday without wondering if they will survive the experience. Made for showing to families, Mr. Beach's excellent Kodachrome footage covers the best of New York City with an apparently effortless leisure, in spite of its brevity. Including many different phases of a great city, the picture has a generous amount of well made closeups. Things that will interest children are strikingly presented. If this reviewer did not already live in New York City, Mr. Beach's movie, with excellent narrative and music, would be the best possible argument for him to change his residence. It certainly will prove to be persuasive in the days when railroads can again urge us to travel for pleasure." Movie Makers, Dec. 1942, 508-509.

This film is held by the Library of Congress. See more information on its NFPF record.

"In fast-moving sequences, New York Calling brings the visitor down the scenic Hudson River Valley via New York Central into Gotham. The film then takes its audience on a boat trip 'round Manhattan, which is followed by a bus ride up Fifth Avenue and visits to museums, parks, Coney Island, the Bronx Zoo, Rockefeller Center, the tops of skyscrapers and many other points of interest. It ends with the traveller en route back home." Business Screen Magazine (no. 2, 1942, 15).