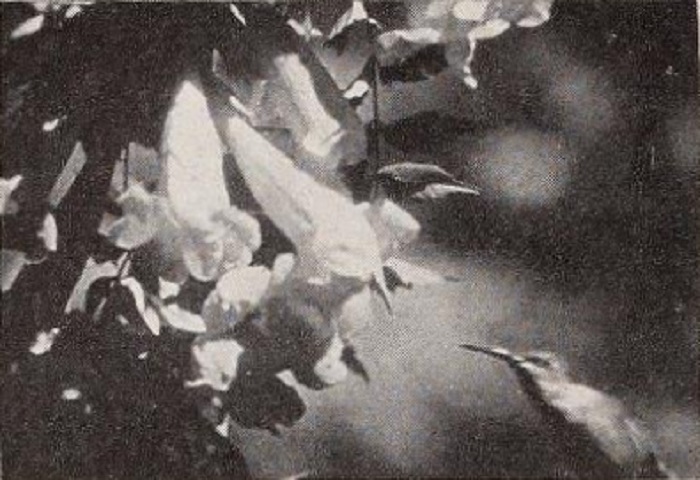 "Birnam Wood has moved again, this time across the ocean from Dunsinane to Cleveland, where Mrs. Warner Seely dons evergreen branches to film Madame Hummer at Home. Thus concealed, Mrs. Seely has made a fascinating record of the life cycle of the hummingbird. Although a dual approach to a film is not generally advisable, she has managed to combine ornithological data with a great deal of human interest. While we are learning much about the habits of the hummingbird, we sense a spirit of friendliness and informality about the film which gives it a wide appeal. A charming introduction leads us from a bird book, out into the garden and finally to the well concealed nest of Madame Hummer. Reaction shots of two young girls discovering the nest and scenes of Mrs. Seely at work in her "elephant hideout," as she calls her camouflaged vantage point, add much to the interest. Verse titles, occasionally too ingenious to scan, contribute to the overall feeling of warmth in this nature picture." Movie Makers, Dec. 1941, 566.