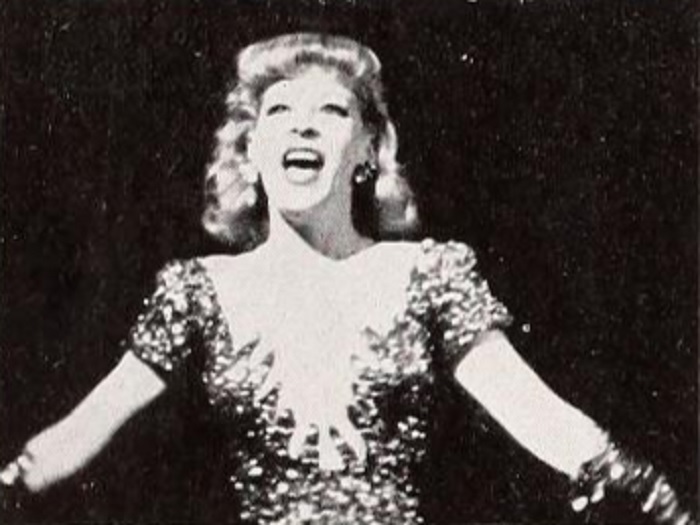 "Oscar H. Horovitz had, obviously, a certain amount of influence aiding his production of Follow the Girls, a motion picture study of the Gertrude Niesen musical comedy. This fact, however, does not explain the secret of his success. Others before him have had influence behind their filming of such dramatic spectacles as the circus, indoor ice carnivals, pageants and assorted stage shows. The influence did not help; their filming remained but a record, immobile and inanimate between the confines of a proscenium arch. Not so in Follow the Girls! Although executed with brilliant technical ability, the paramount triumph of this picture is its prevailing and sure sense of genuine cinematics. The cameraman seems to have been everywhere — on stage and off. Scenes of an ensemble or of a single singer cut in complete confidence from long shot to medium to closeup, without missing so much as a shoe tap. Follow the Girls, besides being lively and colorful entertainment, should serve as a model for all future personal movies of its kind and as an important record of this era of entertainment." Movie Makers, Dec. 1944, 477, 494.

Discussed by Horovitz in "Filming a Stage 'Hit' " (Movie Makers, March 1945, 88-89). In the article, Horovitz shares his technique of shooting a stage performance. The article states that he filmed a performance at the Century Theatre in New York City.

The film is a part of the Jerome Robbins Dance Division of the New York Public Library. NYPL's holding information states that the film's preservation was supported by a grant from the National Historical Publications and Records Commission. It also lists the names of performers and dance numbers seen in the film.

The film is mentioned in Orphan Film Symposium blog posts on November 26, 2014 (where the film's original Ten Best 1944 certificate is shown) and November 29, 2014.

"Motion picture shot by Oscar H. Horovitz in 1944 as a record of the musical comedy Follow the girls. Excerpts of its dances and musical numbers are prefaced by general remarks about the genre. Note however that the soundtrack does not necessarily play the actual accompaniment to the excerpts." Via the New York Public Library.