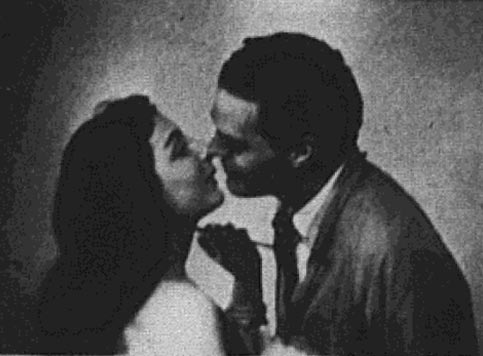 "Strangely enough, although its producers may or may not have intended it, Entre dos Rosas (Between Two Roses) is essentially an old-fashioned morality play set forth in fairly modern filmic turns. For here is a handsome young artist as the protagonist of the action. Here, in the girl of a white rose, is the embodiment of virtue; while there, in the girl of the red rose, is the embodiment of evil. And, overlooking this eternal tug of war, is the figure of Fate or Destiny. Only at the end does Entre dos Rosas turn away from the classic formula, since, with a realistic and more modern psychology than that which stirred the medieval dramatist, it refuses to resolve the ultimate struggle. To the drawing of this age-old triangle, Carlos Barrios Baron has brought stimulating though deliberate direction, while Alfredo Rubio has interpreted his ideas in monochrome imagery which is both visually creative and dramatically compelling. Although Entre dos Rosas of leaves its classic central problem unsolved. It is a striking experimental film well worthy of study by less daring movie makers" PSA Journal, Jan. 1954, 50.