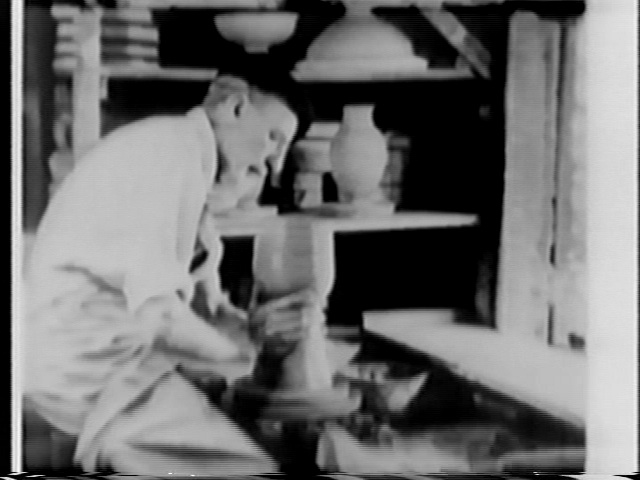 "Ceramics, by Kenneth V. Bloomer, ACL, and Elizabeth Sansom, ACL, is probably the most ambitious amateur film ever attempted on this particular subject and perhaps stands alone in its field. The makers of the film were fortunate in having the cooperation of a famous ceramic artist, Leon Volkmar, who maintains his atelier at Bedford Village, N. Y. It was here that the entire film was produced, its makers having imbibed the spirit of the artist craftsmen so thoroughly that every deft touch, every careful step in the process of making a lovely vase are recorded. The interior lighting and closeup technique are especially good, particularly in those parts where only the delicate focusing of a closeup will reveal the nuances of the artist's touch as he models. The sequences which show the firing of the pottery are unusually well handled and the whole is outstanding in its clarity of continuity. Such a film might be described as a "glorified industrial" but, more than that, it is an educational film in the best sense of the word." Movie Makers, Dec. 1933, 499-500.

Ceramics is part of the Harmon Foundation Collection held by the National Archives.