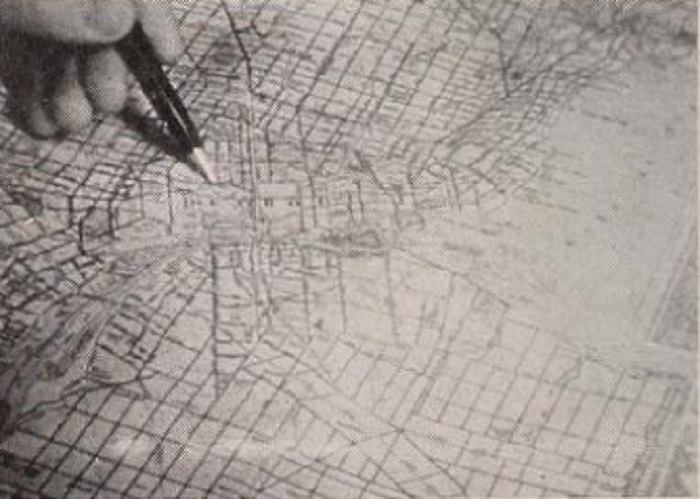 With narrative and music on disc.

"The cooperative plan of education of Antioch College is presented in Campus Frontiers, made by George Chuck Klein. The picture shows how, every ten weeks, half the undergraduates of Antioch exchange classrooms for jobs in offices, factories and hospitals. The frontiers of Antioch's campus are in the world of business, engineering and production. Mr. Klein, traveling over many States, pictured the work experiences of typical Antiochians and shows how their jobs integrate with their classroom studies. The film is an extraordinary record of American industry and science — high lights of the nation's work on a vast scale. Considering the varied lighting difficulties and the problems of organizing setups, Mr. Klein has made an extraordinary picture, the biggest known of its kind. The film is imaginative and clever, with a well planned theme that ties the diverse material together. Numerous cinematic effects are included, and the whole is accompanied by dramatic commentary, recorded on disc." Movie Makers, Dec. 1942, 507.

Discussed by Klein in "A Student Records Antioch" (Movie Makers, Jan. 1943, 13, 30-31). The article specifies the numerous locations that Klein travels to in recording the students.

The film appears to be a part of the Antiochiana collection held by Antioch College.

"Made by a student at Antioch College Scenes shift from the Antioch college campus In Yellow Springs, Ohio, to the New York skyline, Kansas wheatland, Pittsburgh smokestacks, to buses, trains, airplanes, and back to classrooms. After Introductory campus scenes, students are shown at work on some sixty jobs In three major areas: business, social science, and industry and research. Between each group of jobs, scenes on the campus show how the job experience invigorates classroom study; how it gives students a background for running their own $25,000 business of community government; above all, how it equips them to govern themselves, to fulfill 'their birthright as Americans to shape the lives they live.' " Educational Film Guide, 1949 ed., 40-41.